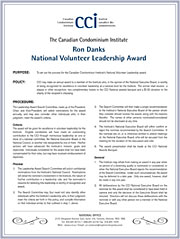 To set out the process for the Canadian Condominium Institute's National Volunteer Leadership award.

CCI may make an annual award to a member of the Institute who, in the opinion of the National Executive Board, is worthy of being recognized for excellence in volunteer leadership at a national level for the Institute. The winner shall receive: a plaque or other recognition, two complimentary tickets to the CCI National awards banquet and a $100 donation to the charity of the recipient's choosing.

The Leadership Award Search Committee, made up of the President, Chair, and Vice-President, will solicit nominations for the award annually, and may also consider other individuals who, in their judgment, meet the award's criteria.

Criteria
The award will be given for excellence in volunteer leadership for the Institute. Eligible candidates will have made an outstanding contribution to the CCI through meritorious leadership on one or more of a national committee, the National Executive Board or the National Council, or another role designated by one of them. His/her actions will have advanced the Institute's mission, goals and objectives. Individuals considered for the award shall not have been compensated for their roles, but may have received reimbursement of expenses.

Bill Thompson, BA, ACCI, FCCI
Bill has had a long and involved history with CCI. First the particulars: Bill became a member of CCI (Toronto Chapter) in 1990. He was elected to the Board of Directors of CCI (Toronto) in 2004 and served continuously to 2015. He was President of CCI (Toronto) from 2010 to 2012. During his time on the Board of CCI (Toronto), he sat or is sitting on the following committees: Membership, Education, By-laws, Conference, and CondoSTRENGTH.

Bill was elected to the Executive of CCI (National) in 2008 at the Annual General Meeting held on October 31st, 2008, notwithstanding the fact that he was dressed up as a cowboy. He was nominated from the floor, and has served continuously on National’s Board of Directors and then the National Executive from that date until today. At the National level, he has sat on a number of committees and has acted as Chapter Liaison with a number of chapters. Always wanting to completely involve himself, Bill has adopted the practice of visiting, or at least trying to visit his chapters he was liaison to at least once a year, usually at his own expense.

It is difficult to put into words the amount that CCI has benefitted by Bill Thompson’s involvement. He has helped so many and has devoted so much time to our organization. Words do not do justice to express the extent of this service. He has put aside personal and business matters in order to devote time and attention to CCI issues. Always playing the role of “the host”, he has made everyone feel welcome and valued. CCI is better, and stronger, because of the “glue” that Bill Thompson has been since the commencement of his involvement.

The Ron Danks Award is given for excellence in volunteer leadership. Eligible candidates are those who have made an outstanding contribution to CCI through meritorious leadership and have advance the Institute’s mission, goals and objectives. This embodies Bill Thompson. There is no greater leader of volunteers, or cheerleader for volunteers, in CCI than Bill. Not only has his actions advanced the Institute’s mission, goals and objectives, he has also helped set them. He has set the “bar” for those involved in CCI for years to come.

Patrick Cassidy is a founding partner of Cassidy Nearing Berryman in Halifax and has specialized in the area of Condominium Law since 1982. Pat provides legal counsel to most if not all of the approximately 400 condominium corporations in Nova Scotia and acts for developers of condominiums and fractional projects throughout Nova Scotia and Atlantic Canada.

Pat has held CCI board and executive positions for several years including terms as President and Chair of CCI-Nova Scotia Chapter and CCI-National. Although Pat no longer serves on the CCI-NS Board he is currently their only Life Member and an active participant in CCI activities, speaking at a variety of CCI education courses each year and answering member questions on all aspects of Condominiums.

Pat is a frequent writer for various publications and a lecturer and teacher for several institutions across Canada and America. He has written and published numerous articles, newsletters and courses on all areas of condominiums; provincially, nationally and internationally.

Pat also works as a part-time faculty at Dalhousie University's Schulich School of Law, teaching the second- and third-year property development course with an emphasis on condominiums.

Pat is also involved in condominiums at a policy and legislative level. He sits on joint industry / government Condominium Legislation Reform Committee in Nova Scotia that has been active since 1986. He has also assisted Newfoundland & Labrador and New Brunswick in revising their Condominium Acts similar to the Nova Scotia model. Currently, Pat is involved in similar legislative reform in Prince Edward Island.

Condominiums have been a major part of Pat's life and he is very proud that his daughter Devon Cassidy has joined Cassidy Nearing Berryman practicing in the area of condominium law and that Devon is the Vice-President of CCI – Nova Scotia.

This award has particular meaning to Pat due to his close friendship with its namesake, Ron Danks. As Pat has said: "One of the high points in my life was meeting and counting among my very best friends – Ron Danks. Ron – wish I had met you sooner and known you longer."

In Recognition of his exemplary contributions to the CCI through meritorious leadership in an activity that advances the Institute's mission, goals and objectives.

On behalf of CCI, we would like to take this opportunity to honour Jim, who in addition to serving six years on the National Board of Directors and three on the CCI Ottawa Chapter Board, is being honoured for his decade of researching and providing quarterly case law summaries for the national newsletter and national members' website - a popular and informative archive of legal condominium history.

James (Jim) Davidson is a partner at Nelligan O'Brien Payne and co-chair of the firm's Condominium Law Practice Group.