October, 11 2019 Published by Toronto and Area Chapter - By James Russell

From the Fall 2019 issue of the CCI Toronto Condovoice Magazine.

If you told me you just chatted with the members of a condominium board who once spent eight hours constructing a green wall from supplies they purchased themselves from their local garden store, I would guess you were fortunate enough to have met the superhero board of Absolute World.

Oh, and did I mention that the same three board members also hand-purchased furniture for their naked terrace and business centre and transported it back to their building in a rented van? “Those two are an inspiration,” says Nicole Lee Pack, the board’s treasurer and newest member, “it’s exciting working with them.”

Absolute World is the fifth addition to the quintuple tower complex that graces the southeast corner of Absolute Avenue and Hurontario. The condominium is just steps away from the commercial and municipal centre of Mississauga and adjacent to her sister tower, which is admiringly referred to as the ‘Marilyn Monroe’ building because of its resemblance to Ms. Norma Jeane Mortenson’s curvaceous countenance.

Within Absolute World’s impressive exterior are 442, one and two bedroom suites. PSCC 939 also includes twenty townhouses, five commercial units, and a 48th floor lounge that offers a spectacular panoramic view of the GTA and beyond. The six level parking garage is shared by all five-condominium corporations, includes dedicated entrances for residents of each building. A single gatehouse provides visitors with information and directions. 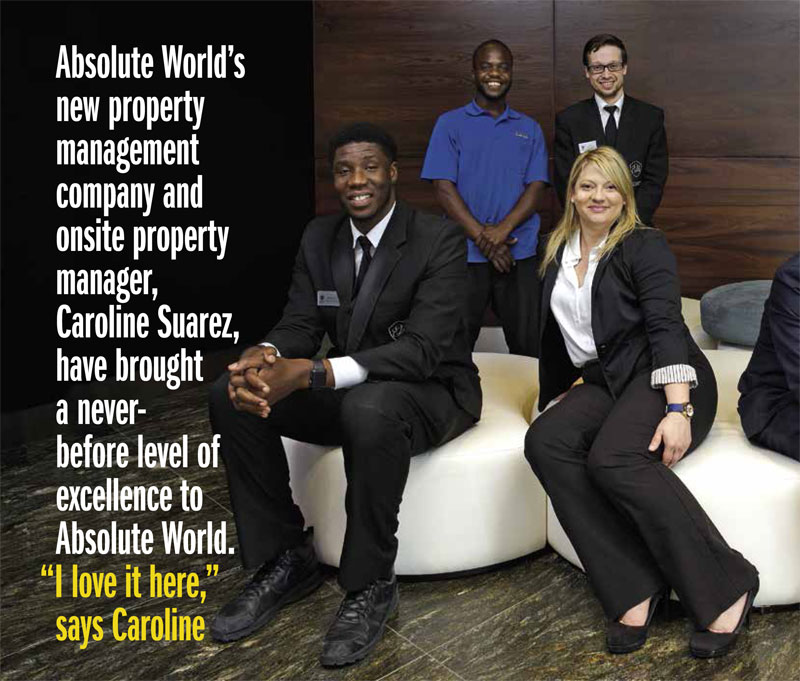 Crowning Absolute World’s fifty storeys is Mississauga’s unofficial lighthouse, equipped with a 360 degree, blazing beacon that not only radiates a welcoming glow for wayfarers far and wide, but according to their website (absoluteworld. ca), the beacon is used to raise awareness for “Nondenominational, non-political, registered national charitable events or causes.” In the recent past, Absolute World’s beacon has flashed solid blue, for World Autism Awareness Day; orange and yellow, for World Day Against Child Labour; dark and light blue, for International Nurses Day as well as unique colour schemes for thirteen other charities and celebrations. To mourn last year’s tragedy that resulted in twenty people killed or injured aboard the Humboldt Broncos’ team bus, Absolute World’s beacon went dark. 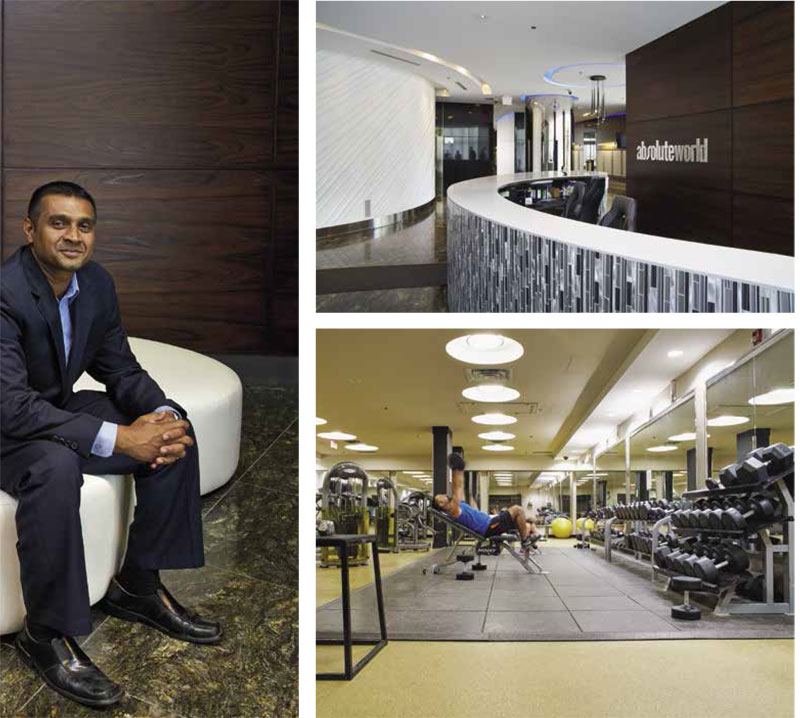 Absolute World was completed in 2012 but its beginnings extend more than a decade into the past. It was in 1994 that Hazel McCallion, then Mississauga’s mayor, announced the design competition for Absolute World and her sister building. The six finalists were chosen by a panel of architects and civic officials. The public was then encouraged to vote for their preferred design.

The competition’s winning design attracted Jon Record’s attention, “We’re gonna live in that building someday,” Jon said to his partner the first time he set eyes on Absolute World. Jon, president of the board since 2016, was one of the lucky few to land a suite as the entire building sold out the first day.

During his daily marathon training runs, Jack Periera watched with interest as Absolute World rose from its cavernous beginnings toward the stars. “It was extremely affordable,” he says of the approximately $200K he paid for a unit that includes a panoramic 220 sq. ft. balcony. “We (Absolute World’s residents) have one of the best views in the GTA,” Jack adds then notes that his suite, like those of Absolute World’s other owners, mostly young professionals, has more than doubled in value.

“We have a younger crowd (of residents),” says Jon, a young professional himself. Yet thanks to Absolute World’s community-friendly floor layouts and despite the torturous hours that young professionals endure, Jon adds, “I literally know all my neighbours.” 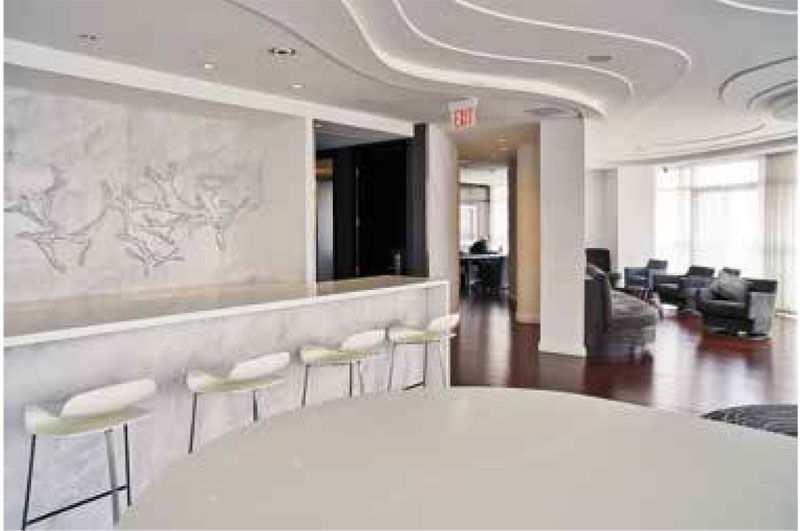 That sense of community includes their two concierges, who not only know most of the residents by name but the names of their dogs as Absolute World’s fourlegged residents make a habit of stopping at the front desk’s ‘treat bar’ to hang out with their friends and discuss global warming, NAFTA and fire hydrants. 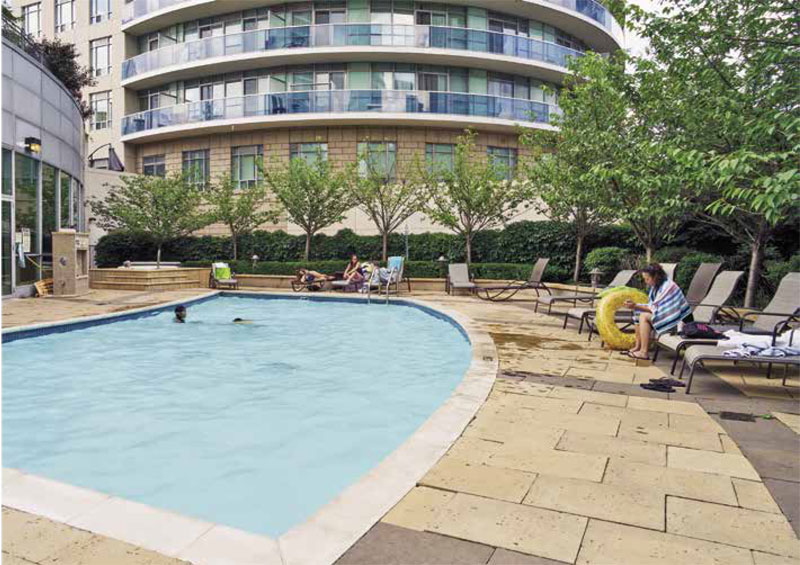 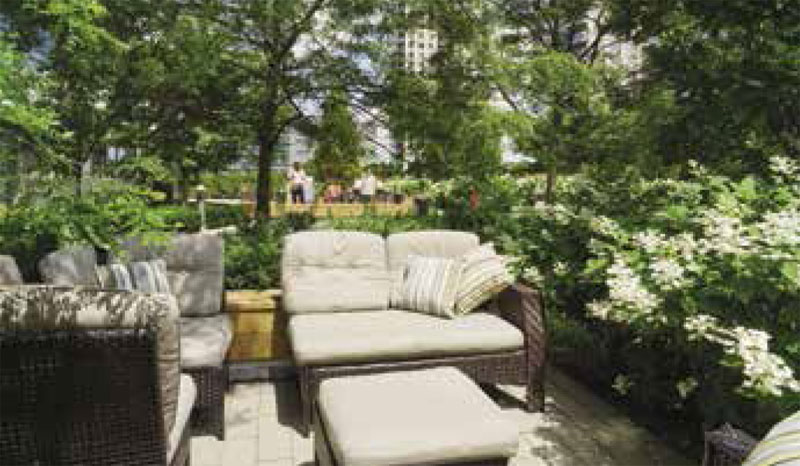 The incoming 2016 board took a ‘hands on’ approach to their job. Working with both a new Property Manager and management company the board embarked on a plan to improve the comfort and liveability of the building that included not only purchasing furniture, but also improving resident’s access to Absolute World’s many amenities. “We wanted it (Absolute World) to feel like a home instead of just a building,” says Jack. The board turned to technology to help them communicate that new culture and sense of community to residents. Monitors in each of Absolute World’s elevators allow the board and management to provide residents with news, reminders and important announcements. The screen’s information can also be accessed on resident’s smart phones via a live feed. Additionally, the board enjoys the good fortune of having a building full of ‘email savvy’ residents so communication is instantaneous. The board also incorporates tech into their fall AGM with a projector and screen, which, along with providing building-specific information, is used to project ACMO (The Association of Condominium Managers of Ontario) videos about the administrative and technical aspects of condominium life.

Absolute World’s website (absoluteworld. ca) is unique in that it contains a ‘realtors’ page with both a greeting message and a link to a Realtor’s Guide that contains an overview of the building’s amenities and design features. The Guide also advises realtors how to obtain a set of ‘Amenity Keys,” which allow agents and their clients access to the gym, terrace and Absolute World’s other spectacular amenities. When residents file an ‘incident report’ by clicking the ‘contact us’ icon, the information is transmitted not only to the management office but each member of the board receives a copy as well. 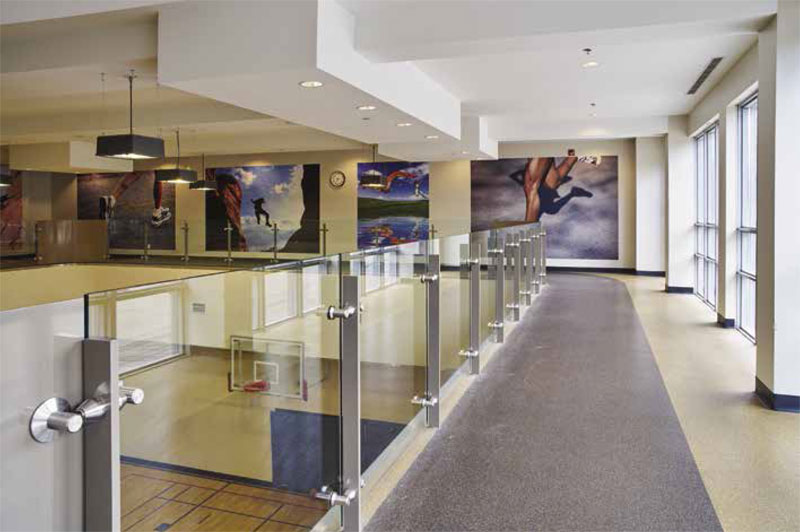 Absolute World’s new property management company and onsite property manager, Caroline Suarez, have brought a never-before level of excellence to Absolute World. “I love it here,” says Caroline, an industry veteran and the corporation’s property manager for nearly a year, “The board is amazing. Great ideas and feedback (to management).” An administrator, three contracted cleaners, two superintendants and two concierges assist Caroline.

Absolute World’s young demographic and changing consumer practices have required the board to make several unforeseen upgrades to their relatively new building. “We created a parcel storage area due to the overwhelming demand of online shopping by our residents,” says Jon. By ‘overwhelming’ he is referring to the approximately one hundred parcels delivered to Absolute World per day. The board is also in the process of assigning dedicated parking spots for the cavalcade of vehicles that make 80 to 100 food deliveries a day. With an eye to aesthetics, the board has plans to replace the lobby’s pillar lights with units that mirror their ever-changing roof top colour scheme, a lovely addition that wasn’t part of Absolute World’s original design. Past upgrades include:

Though lionised in the Toronto Star, Globe and Mail, and a host of Canadian trade publications, Absolute World’s reputation for excellence extends far beyond Canada’s borders, which is why the board occasionally receives requests from international-based photographers wanting access to Absolute World in order to photograph the interior and its iconic facade.

But while Absolute World’s architecture elicits well-earned admiration, residents know that their condominium’s most impressive feature is their board. Toward the end of my interview, Nicole, speaking about her two fellow board members, said, “It’s very inspiring to see how passionate they are.” Inspiring and passionate are accurate descriptions not only of the tower’s design, but Absolute World’s entire board of superheroes.