April, 12 2022 Published by Toronto and Area Chapter - By Sally Thompson

Reserve Fund Planning – Not as Simple as it Seems

From the Spring 2019 issue of the CCI Toronto Condovoice Magazine.

If Your Condominium is Less Than Ten Years Old and You Are Contributing Less Than $2,000 Per Unit Per Year to Reserve, You Are Almost Certainly Underfunding Your Reserve

I have encountered many 10 to 20-yearold condominium boards who have a severely underfunded reserve fund and no idea that they are in trouble. How is this possible, given the mandatory requirement for reserve fund studies and reserve funds imposed by the Condominium Act?

All Ontario condominiums start out underfunded.

The requirements in the Act need to be fixed because the current minimum, which is 10% of the operating budget is NOT enough. Even when builders increase to 13% or 15%, it is NOT enough. Until the legislation gets fixed, every new condominium must undergo a very steep increase in reserve fund contributions. When this is not addressed quickly, the long-term problems start.

The Condominium Act only requires a reserve fund study to model thirty years of data.

As everyone knows, very little money gets spent from reserve for the first twenty years of a building's life. All the components are new. But after year twenty, spending increases dramatically. So, when a building is new, a thirty-year model (the green dashed box below) includes twenty light-spending years, and only ten heavy-spending years. During each three-year update, three years of low-spending fall off at the front end, and the study picks up three years of heavy spending. Over time, all 30 years become heavy-spending years (the red dashed box below). That means that, by design, every study that only looks forward 30 years should expect significant increases at every update. The cash flow in your Notice of Future Funding may show a few increases, followed by inflation-matched increases, but you will never reach those inflation-matched years because the time horizon shifts with each update. 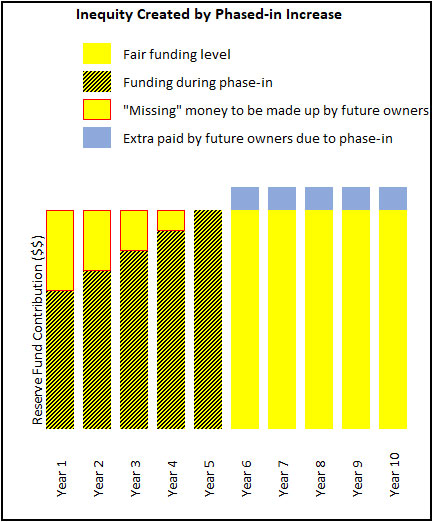 At the most basic level, any phase-in period means that you are going to allow owners in the near term to pay less than their fair share of reserve fund contributions by deferring some of what they should have paid onto future owners. Boards seem to think this is somehow sharing the pain with future owners, but, on an inflation-adjusted parity basis, you are increasing the financial burden on future owners to a higher level compared to the financial burden being felt by current owners. In the graphic to the left (which ignores inflation for simplicity), if the contribution level that would be equal for all owners (yellow) is phased-in (the grey contributions), then the "missing money" (yellow with red border) needs to be made up by future owners (the blue money) on top of their fair (yellow) share.

The longer the phase-in, the more future owners will need to pay. I often see studies with ten-year phase-ins, which not only creates a huge deferral onto future owners, but also means that the required increase is not fully implemented before the next update. Since an increase must be expected again at that update (due to the shifting time horizon), and a phase-in will likely be used again, the amount deferred to future owners builds and builds. By following a plan, boards feel they should be fine, but a plan that includes a long phase-in is a plan that intends to create a future financial mess. 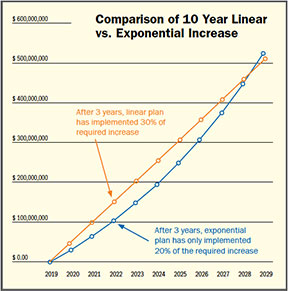 Sounds bad, because it is. A cash flow plan that allows a shortfall to be phasedin based on an exponential increase (X% per year increase) over more than three years, rather than a linear increase ($X per year increase) defers even more of the required increase onto future owners. On a ten-year linear phase-in, you would have implemented 30% of the required increase in three years. With an exponential phase-in, using data from an eight 8-year-old building that would require an increase of 11% per year for ten years, I calculate that you would only have implemented about 20% of the total required increase over three years. The miracle of compound interest is amazing when it is helping build your retirement nest egg, but it is equally powerful at undermining your future balance when you implement an exponential phase-in.

Getting less of the increase implemented prior to your next study just keeps pushing the financial challenges ahead in time. I liken it to a snow-plow. If the snow is only a half-an-inch deep, the plow can run through it easily, but the further you go, the more snow that builds up in front of that plow, and eventually it will grind to a stop! If you are going to follow a phase-in period of longer than three years (which I do not recommend), please ensure that it is linear and not exponential.

Market changes such as the loss of a key contractor due to a merger, or global influences like a major hurricane can have a significant upward pressure on prices. USA's tariffs are similarly going to put pressure on prices, especially for things like windows. These above-inflation increases can require a significant contribution increase during a study update. It is important to ensure that updated studies include confirmation of unit prices underpinning the study; these cannot just be blindly inflated without being checked.

Condos have been allowed in Ontario since 1967. We are learning many lessons as the 1970s condos face 40 to 50-year renewal projects. These include things like generator replacement, major garage renewal, buried service renewal, and cladding, window and balcony guard renewal. These projects are proving more challenging to implement in occupied buildings than was perhaps anticipated by the industry. For example, we are finding that window-wall systems are much costlier to replace than the simpler windows that were typically replaced in rental apartment buildings over the last couple decades. This is due to the disruption to knee walls, partition walls and ventilation ductwork, as well as a need to bring the windows in from the exterior and provide protection and security during the project. As we learn from these guinea pig buildings, it is important for reserve fund providers to identify any previously too-low budgets and increase them at the time of updates.

Buildings are getting harder to repair.

As we build taller, and on more congested sites, the cost to repair escalates. The roofing price that applies to a 20-floor high-rise in a grassy field is not the same price that will apply to a 50-floor highrise sitting above two major downtown streets. Permits, crane costs, hydro-line protection and other access and protection costs can form a significant portion of a project cost. I suspect many studies are using "grassy field building" prices for sites where they don't apply. And the ultrahigh- rises have costs (like replacing the hydraulic cylinders in the building maintenance unit when the unit is not strong enough to hoist the cylinders up to the roof) that are unfamiliar to reserve fund study providers and are likely to be underestimated. They also have equipment installed in locations where the developer clearly didn't do any planning with respect to future renewal (like a generator on the 54th floor of a 56-floor building with no access to the exterior). Replacement budgets are almost unfathomable.

So, how can condo boards protect themselves and help ensure that their condominiums will be financially successful into the future?

Deferring work to the future, implementing long phase-in periods or shortening the analysis period to the minimum 30 years (in newer buildings) might feel good now, but it will create a nightmare for future condominium owners. We all need to be diligent in ensuring that condominium owners contribute their fair share to the reserve fund starting when the building is new.