There's a Form for That

From the Fall 2018 issue of the CCI Toronto Condovoice Magazine.

In November 2017, the Province of Ontario introduced substantial amendments to the Condominium Act, 1998 (the "Act") and a host of new regulations. These amendments mandated the use of certain forms and were ultimately intended to increase transparency of condo governance, and to encourage engagement by standardizing and facilitating communication between condo boards and unit owners.

The Ministry of Government and Consumer Services posted 15 forms in November 2017. These forms covered a wide range of areas including, among others: records requests, proxies, and information certificates.

The first impressions of these forms were generally negative. The condo industry noticed a number of issues with the initial set of forms, including with the way they were rolled out. The forms were introduced just one day before they came into force, leaving no time for the industry to review or understand them.

Additionally, the forms were difficult to locate, access, and modify. The industry also complained about their length, convolutedness, and lack of availability in languages other than French and English.

In May 2018, and after receiving industry feedback through blog posts, articles, and comments, the Ministry introduced another set of amended forms. This article will discuss some of these new forms.

The new but older proxy form (which was introduced in November 2017) was particularly difficult to use and understand, in part, because of its unusual layout, confusing options, overbreadth of uses, and unclear directions.

The new proxy form (which was introduced in May 2018) was amended to address some of those problems. The previous form only permitted the unit owner to select between authorizing the proxy holder to vote on all matters, or only on procedural matters. The new form introduced a third option allowing the proxy to be used only for establishing quorum, rather than to vote.

The new proxy form is more user friendly with clearer instructions and collapsible sections allowing corporations to tailor proxy forms to the relevant matters being considered. This new form is also less onerous, preserving the validity of the proxy even if certain boxes (depending on which ones) are not filled out.

The new proxy form still has a number of shortcomings. For instance, the form is relatively long, difficult to access, and provided only in English or French. Additionally, the form requires the owner to initial every box that they tick. In York Regional Condominium Corporation No. 818 v. Michael Przysuski, the Superior Court of Justice held that a proxy (albeit in an older format) was invalid because it was missing an initial. This decision show-cases the significant effect of a relatively simple omission.

In order to address these shortcomings, it is vitally important for condo corporations to provide supplemental guidance on how to fill out these forms. They may provide instruction sheets highlighting the relevant sections or provide sample proxy forms filled out by fictional owners for various purposes. The condo may also provide those instructions in another language more widely understood by unit owners.

Disputes with respect to owners' request for records were the fodder of much litigation. The government has not only streamlined, but standardized, the process with the use of forms. In fact, reflecting on these changes in a recent decision by the Condominium Authority Tribunal (Micieli v TSCC 1753, 2018 ONCAT 5), the tribunal member stated, "The Act has strengthened the "open books" principle regarding access to condominium corporation's records."

The way it works now is that owners and condominium corporations must follow a strict four-step process to obtain records. The four steps are as follows:

The most significant changes are with respect to the amount (and quality) of communication required by the board and critical timelines.

The board will have 30-days to respond to an owner's request for records, providing reasons for any refusal to disclose. Also, the concept of "core" records has been introduced to expedite owners' requests for fundamental documents of a condominium corporation. The focus on "core" and "noncore" is intended to differentiate between two distinct access procedures, allowing an expediated process for those documents specified as "core" and for which access is often requested by owners. Examples of core documents include the condominium corporation's governing documents, current budget and audited financial statement, recently issued information certificates and approved board meeting minutes.

There are serious cost consequences for a condominium corporation if they do not comply: up to a maximum of $5,000.00!!!

Previously, the aggrieved owner would need to commence a claim at the Small Claims Court and the penalty to the corporation would be $500.00. 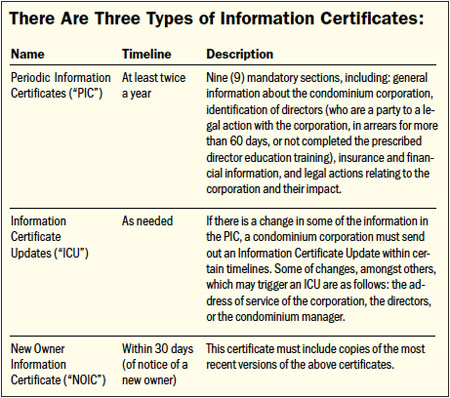 At almost every AGM, there is at least one perturbed owner who raises the concern that the board is not communicating enough. When it comes to communication in condos, the authors have seen boards struggle with it all: newsletters (delivered quarterly and even monthly), town- hall/ information meetings, even attempts to mix social with information through summer BBQ's, winter holiday parties and Halloween parties.

Most boards do not dispute the idea of providing more notice or communication to owners, but the real question has always been: how much is enough?

Effective November 1, 2017, candidates for director positions must make certain mandatory disclosures prior to being considered for election. This includes, for example, if the candidate is not an owner or occupier of a unit in the condo. While the Ministry has supplied numerous other forms, curiously, it has not done so for candidate disclosures.

Although there are no standard forms, the questions asked are relatively straightforward. As such, condos may provide their own disclosure forms to candidates. Further, condos may pass by-laws which introduce more disclosure requirements, in addition to the mandated disclosures as per the regulations.

Robust candidate disclosures are particularly important given recent news stories about condo board directors. For example, there were many news reports in 2017 regarding individuals that were on the board or running for the board in at least six different condo corporations, even though they had little to no connection to the condos. With the appropriate disclosure, unit owners can make informed choices when electing directors, while avoiding these situations.

So, in conclusion, we say "Welcome to the New Forms" because they are here to stay. Some will say they are confusing, but through practice (and a little patience), we believe that these forms will help everyone establish good condo governance.

It is clear from our brief discussion above, there are more forms. Printing and delivering these required forms will cost money. Prior to November 1, 2017, the only annual statutory requirement to send a notice to owners was to call and hold an Annual General Meeting. Now, a board will have (at least) four (4) mandatory mail-outs: the preliminary notice, the notice of meeting, and two periodic information certificates. Add more mail-outs if you have any changes which trigger an information certificate update.

The saving grace is that the amendments to the Condominium Act, 1998 have clearly contemplated a move to electronic communications. Section 47(6) of the Condominium Act, 1998 provides for electronic consent and, although not required to be used, the government has prepared a form titled, "Agreement to Receive Notices Electronically" which provides that the owner's address of service for the purpose of delivering notices may include email, facsimile, or other.

While we all get accustomed to the new way of doing things, there will be growing pains. Once the new way of business becomes the norm, the authors are relatively optimistic that these amendments and the many new forms will result in greater transparency, greater communication and ultimately more cohesive and educated communities.