October, 19 2016 Published by Toronto and Area Chapter - By Rainer Vietze

Understanding the "Ins and Outs" of ITCs

From the Fall 2016 issue of the CCI Toronto Condovoice Magazine.

Our Story So Far …

Previously we learned that all supplies of goods or services made in Canada are categorized as (a) taxable supplies (full rate), (b) zero-rated taxable supplies or (c) exempt supplies. We also learned that even when an item is a taxable supply, HST/GST would only be charged where the vendor is a Registrant for HST/GST purposes. The table on the right shows how HST would apply to each category depending on the status of the vendor. 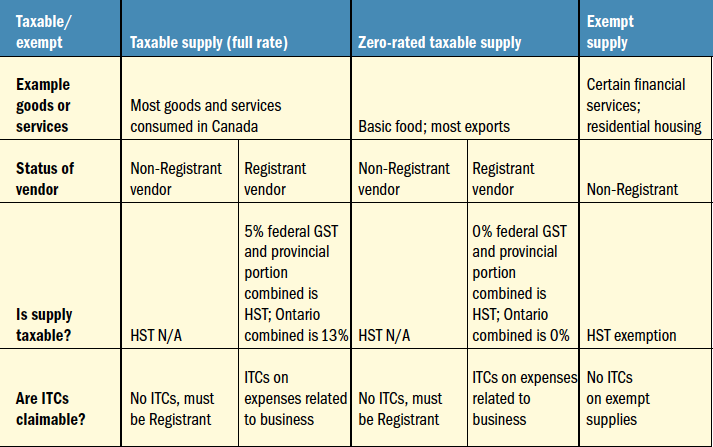 There is one more element needed, and it's a rather important one, given its purpose is to eliminate the multiple layers of taxation would have on the price an end consumer pays. This element is known as an "Input Tax Credit", which is generally shortened to "ITC" as illustrated in the table on the top of the next page. A quick example will help demonstrate how ITCs fit into the HST system. The following spreadsheet shows the path from Widget to Giga Widget, and the associated progression of costs from manufacturer to more manufacturers to the final customer. The example ignores profit margins and only passes along accumulated costs.

If there had only been one manufacturer with laid out costs of $400.00, the end consumer would have paid $452.00 inclusive of the HST. Contrast this with the above example where there are four manufacturers along the way and the same $400.00 costs the end consumer $548.03. The extra cost of $96.03 reflects the impact of HST being charged on HST each time there was an onward sale to the next level.

ITCs are governed by some basic rules that ensure the HST meets the objectives of a value-added tax. Generally speaking, ITCs can only be claimed by a Registrant in respect of a business being carried on for the purpose of supplying taxable goods and services (both full-rate and zero-rated). ITCs cannot, therefore, be claimed in respect of an exempt supply, although in some cases, there are rebates available to certain Registrants. ITCs cannot be claimed by Non-Registrants. That being said, are ITCs something ABC Condominium Corporation should be concerned about? In short, yes. ABC finds itself in a unique situation where the annual maintenance fees being paid by a limited number of commercial unit holders is greater than $50,000. As a result, ABC was required to register for HST purposes and commences charging HST on the billings to the commercial units. The annual maintenance fees paid by residential unit owners are exempt supplies. ABC should be entitled to at least a partial refund for ITCs since at least some of the underlying expenses are being incurred in carrying out a commercial activity.

The vast majority of Registrants are fortunate in that their supplies of goods and services are either exclusively taxable supplies or exclusively exempt supplies. As a result, they will either have a full claim for ITCs (for taxable supplies) or no claim for ITCs (for exempt supplies). However, it is possible to be in the business of making both taxable and exempt supplies, and where this is the case, a portion of the HST paid by the Registrant would be part of an ITC claim.

The distinction between taxable supplies and exempt supplies, and the concept of ITCs are, of course, irrelevant for many condominium corporations since they are not Registrants at present. Those issues only gain relevancy when the condominium corporation registers for HST purposes. Moreover, once registered, it is a foregone conclusion that the corporation will need to track its taxable and exempt supplies and apportion the HST incurred on expenditures between those two supply streams.

Apportionment is necessary to ensure that only the HST on those expenditures used in making taxable supplies (for instance, commercial unit maintenance fees) is including in the ITC claim made to the CRA. Given that this apportionment directly determines how much HST is refunded to the condominium corporation, the Act provides relatively little guidance on how to apportion incurred HST between taxable and exempt supplies. Regardless of the method used, once a method is determined, every effort should be made to apply it in a consistent manner from one reporting period to the next. In that regard, the chosen method should be fairly easy to follow to avoid judgement calls.

In the situation where revenues are limited to residential and commercial maintenance fees, for instance, the easiest method would be to apportion the HST based on the relative percentage that each fee is of the whole. Since each unit owner has an undivided interest in the condominium equal to their ownership percentage, they would have a similar interest in the operating expenses and reserve fund expenditures for the year.

Where exempt supplies include other activities, it should be possible to identify and separately deal with any expenses specifically incurred to make those exempt supplies. They can then be excluded from the expenses to which the general apportionment method is applied.

As noted above, apportionment of the HST incurred on the corporation's expenditures based on the ratio of taxable to exempt supplies would seem reasonable where a condominium is concerned. Generally speaking, this would mean that the current year ITC would be taken into account in the next year (which is also generally when it comes into cash flow).

The reimbursed HST does raise an interesting question in terms of whether the full amount of the refund should be allocated to the benefit of the commercial units, or whether all unit holders should share in the refund proportionate to their interest in the common elements.

While one could argue that only the commercial unit owners should benefit given it was the treatment of their fees as taxable supplies that created the opportunity to claim a refund, one must also consider the legal basis of ownership in a condominium corporation. Quite simply, every unit owner has an undivided interest in the common elements and fixed assets equal to their proportionate share as defined in the corporation's Declaration.

Until now, condominium corporations that were also HST Registrants have been rare, but this will likely change as the amount of taxable supplies increases (especially when special assessments are made) while the registration threshold remains constant. Once registered, the condominium corporation will need to apportion any HST it incurs between taxable supplies and exempt supplies made by it for purposes of an ITC claim. While apportionment should be easy in theory, a number of issues may make things more difficult in practice.

A new Registrant should take the time to fully understand the nature of their supplies and the related expenditures so that they can adopt an apportionment method that can be implemented and maintained fairly easily and that will be consistently applied during the period and throughout all periods.

The method provided in this article would generally meet those objectives, but before adopting any method, it should be modified to take into account facts and circumstances specific to the particular condominium corporation. Furthermore, the information contained in this article is of a general nature and should not be relied on. Condominium corporations should seek professional advice when dealing with the matters discussed herein. Lastly, readers are cautioned that tax legislation, including any regulations or other pronouncements made thereunder, is constantly changing. The information contained in this article is current as of the publishing date, but no effort will be made to update it for subsequent changes to the underlying legislation.