July, 1 2020 Published by Toronto and Area Chapter - By HELENA MONCRIEFF

From the Summer 2020 issue of the CCI Toronto Condovoice Magazine.

Lynn Samuels is soaked to the skin. She's unspooling a roll of yellow caution tape in the rain, wrapping it around the spot where footpaths meet on the property she manages. The space has to be blocked from gatherings because of COVID-19. 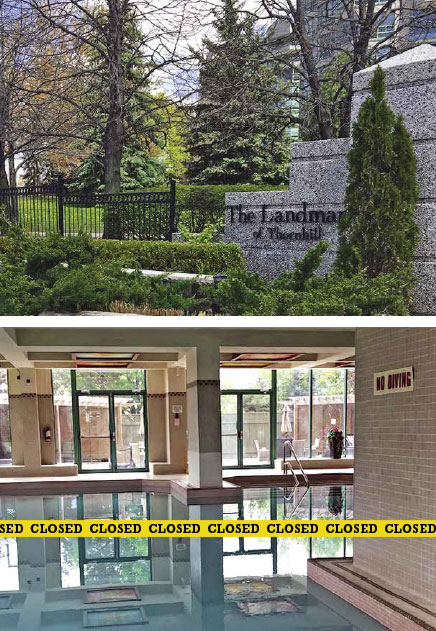 Outside maintenance isn't in the job description for the senior property manager of Landmark II of Thornhill, but Samuels puts it simply, "I do what has to get done." She's also spent a morning clearing out a supply room off the lobby and adding shelves so residents can receive parcels without contact and moved a table in front of the security desk to put distance between staff and others.

After 30 years with the building and with GPM Property Management, Samuels knows what has to be done and when. She arrived at the job while the complex was still under construction, setting her sights on the new build because it was close to home. But even with decades of experience, managing a condominium building in a pandemic, when everyone has been told to stay home, is a new frontier.

Landmark II is home to 1,500 residents, more than 85 per cent of them owners. They're a mix of young families, retirees, and middle agers still heading to work every day. A steady stream of cars leave the garage in the morning heading into rushhour traffic. Another stream of vehicles arrive, dropping off toddlers to spend the day with grandparents. And a third wave of kids run off to school buses, backpacks bouncing off shoulders. The pandemic stopped all of that. Having everyone home all the time, but unable to connect physically is a challenge.

The concept of home, that your condominium includes not just the 1,500 to 3,200 square feet behind Landmark's unit doors, but the gardens, driveways and everything inside the front door, is suddenly in question.

The recreational facilities had to be closed, so all of the outlets that expand the home life are gone. No pool, sauna, games room, gym or tennis courts.

"I try to educate on why we need to isolate," Samuels says of her efforts to remind people who have been out of the country. For them, isolation means restricted to their own unit. She has staff pick up garbage at their unit doors so they don't have to walk the halls to the garbage chute. "You send out a communication and then you see someone walking through the lobby," she sighs. "You have to explain and go over and over it again."

That perseverance and patience is part of what makes the condo board sing Samuels' praises. Randee Korman is the board's treasurer. She's lived in the building for 18 years, 12 of them as a board member. She remembers walking into her first meeting and the big issue on the agenda was whether to replace the boilers.

"I felt like I was just thrown into the breach. I think Lynn recognized that sitting in the boardroom and she explained everything so well," Korman says. "She was so knowledgeable about a boiler, how it worked, where it sat, what it did, all of the things a lay person really didn't know. Then she did one other thing. She took the board and we went on a tour of the building."

Korman, like many who've lived in a house, assumed the mechanical stuff was in the basement. The tour started above the building's 15th floor and then headed down to the basement where Samuels showed them the pumping system at work. "She's willing to answer any question no matter how dumb it might be," Korman laughs. Samuels puts maintenance at the top of her priority list. Before she moved to Landmark, she ran the maintenance department at the Eaton Centre, serving business tenants in the 1.9 million square feet of office space in three towers. When something goes wrong, there's a lot at stake. "Mechanical rooms are the foundation of the building. It's like your teeth," she says.

She's made it her business to understand how things work, watch contractors as they make adjustments and surround herself with good people. "It has taken me many years to form relationships with people to put trust in how the building is operated and maintained. The preventative work will allow me to get the extra five years out of mechanical equipment or renovations."

And they talk. Contractors, visitors and real estate agents who visit many buildings in a day will offer comments on what they see. It's an opportunity to see how the building measures up. "If you pay attention to what they said, you have the opportunity to correct it," Samuels says.

Bob Hogan has been president of Landmark II's board for 15 years. Before his retirement, Hogan was a senior executive with Hudson's Bay. For a time, he had 2,000 people working for him including several executives. "If they couldn't deal with the customer and the employees then things started falling apart," Hogan says. So he's impressed with Samuels' managerial skills, relationships with residents, building knowledge and finance.

"She understands the earning statements and balance sheets, to the point where she's very helpful to the board," Hogan says. At the start of the COVID-19 isolation, the board had met to discuss next year's budget. That's where things get tricky not just for condo boards, but everyone. Setting a budget into the unknown takes vision and fortitude. "She [Samuels] thinks a little more ahead than what the board members think about. She anticipates a lot of things that might come up," Korman says. Even so, it will be a tough year. Samuels notes that insurance premiums have gone up and so have the deductibles. So the wish list was already gone. Now with so many people out of work or missing paycheques, some residents may be pressed financially.

A phone rings as Samuel explains, "When you run a condominium you have an obligation not just to one owner but to all the owners."

All management companies are having the same discussions. Hogan credits Samuels for being a step ahead. She was watching what was happening in other countries and other condos before the infection hit Canada. He says she's drafted a plan for an even more stringent shut down, should it come. "What do the dog owners do? Which door do they use? The whole thing is all laid out in case the government says shut the doors and it's a total lockdown." 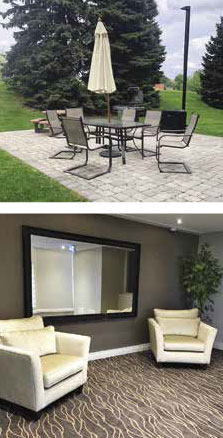 The board is ready for an emergency meeting, if needed.

The pandemic will end and life will go on. As for what that life will look like, no one can say for certain. Employment and finances may take time to recover. Fear may linger. The social loss is a big one. Landmark II's social committee had been adding events over the years to reflect the changing population of the building. Samuels says it's definitely become much younger and more diverse. A Chinese festival kicked off Lunar New Year and the committee was gearing up for Nowruz, the Persian New Year celebration. Last year almost 100 residents and their guests danced and ate late into the evening. An Indian Holi celebration was next on the discussion list, with plans for colour throwing.

Samuels has watched the building evolve over her 30 years. She's seen babies grow into adults. "I've watched them grow up. They've gotten married, they've moved out and then they move back in and have children."

There are plenty of extended families making the building their home. Hogan's sister also lives in the building. Korman moved her mother into a unit a few floors up.

Samuels says it may not be typical of most building managers but the residents have seen her family evolve too. Samuels raised her three children just down the street from the Landmark. If work had to be done on a Saturday, they joined her and they were welcomed to the community parties over the years.

Samuels is a fixture at the Landmark and in the wider community. She grew up at Bayview and Steeles and then lived for 25 years in Thornhill before moving right back.

"I'm very consistent; I'm very much in the box; I don't love change," she says noting that she seems to have a big attachment to Bayview. She gardens and enjoys being outside, particularly at her cottage north of the city where she hopes to retire. It's not on Bayview but, she laughs, "My grandparents had a place 10 minutes from where I purchased and that's where I spent my childhood."

For now she's staying put, insisting she doesn't know what's holding her at Landmark II then realizing she does. "It's obviously the community."

During the pandemic, Samuel's role was deemed an essential service. Her board members would agree.