November, 12 2020 Published by Toronto and Area Chapter - By JAMES RUSSELL

From the Fall 2020 issue of the CCI Toronto Condovoice Magazine.

Flourishing During the Pandemic and Beyond

"We are all winners"!
Those were the Board's words to the residents and staff of Palace Pier after being notified they won the prestigious Condominium of the Year Award for 2020.

But it wasn't simply the knowledge that Palace Pier would received a customized street sign, one thousand dollars and a feature article in this issue of the Condovoice that excited the Board, management, staff and residents of Palace Pier, it was the industry recognition that Palace Pier excels in its strong sense of community, fiscal responsibility, effective communication, staggering range of social programs and amenities and, more recently, the Board and management's peerless leadership in responding to Covid -19. 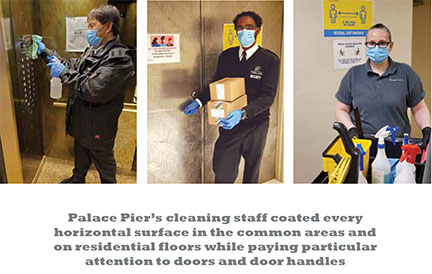 It was in February, nearly a full month before the World Health Organization designated Covid-19 a pandemic that the Board and management of Palace Pier began drawing up a comprehensive response. Together they identified the need to: to inform residents how to prevent exposure to the virus, alert residents to new local and global developments, update residents and staff about government restrictions, and of course provide residents and staff with options in the event of infection. Palace Pier's response included: 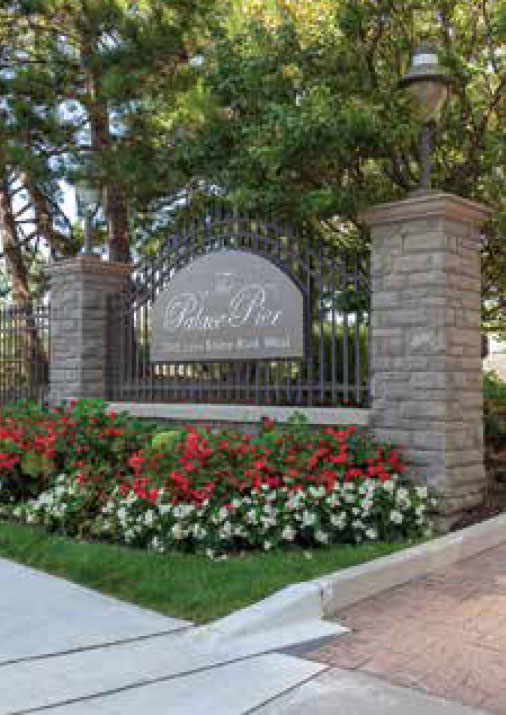 Palace Pier's cleaning and disinfectant regimen was particularly rigorous. Using the same exceptionally expensive, EPAregistered microbe-shielding product used by the TTC, Palace Pier's cleaning staff coated every horizontal surface in the common areas and on residential floors while paying particular attention to doors and door handles. Elevator buttons and residents' doors are disinfected regularly. Additionally, management placed disinfectant wipes beside the push buttons in each elevator. The Board and management also created a dedicated safety plan for the sizable number of snowbirds soon returning to Canada after spending their winters in the United States where infections continued to proliferate. An identical plan was created for residents returning from vacations or business trips to 'hot spots' in Europe and China. The plans included:

In all, the Board's and management's planning and execution of Palace Pier's pandemic strategy was a spectacular success, and, as of this writing, not one Palace Pier resident has fallen ill from Covid-19.

Communication was an essential part of the Board's strategy even before the 'challenges' of 2020 reared their heads. In addition to their newsletter, which won CCI's Newsletter of the Year award for 2018, the Board communicates also lets residents know what is going on with frequent e-blasts through the resident portal site, digital notice boards which can be changed quickly, and weekly highlights mailings. 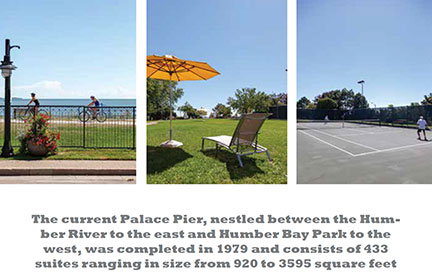 Not a single member of Palace Pier's large in-house staff or contract cleaners was laid off during the pandemic. In fact, the Board of Palace Pier gave all their employees a temporary pay raise as a gesture of appreciation. Palace Pier purchased and distributed masks to staff long before the Toronto medical community widely recommended their use. For added safety, staff receives daily temperature checks before their shift.

Although Palace Pier's management office was closed to residents, office staff continued working, at times from home. "Both Donald Balla, our Condominium Manager and Dale Sammy, our Security Chief....were heavily involved in the COVID response, and a lot of our success is due to them being able to work together to implement policies and procedures, as well as enforcement," says Thelma.

In addition to the Board's letter announcing the corporation's Condominium of the Year award, the Board sent a separate letter to staff that said in part, "On behalf of Palace Pier, the Board of Directors wants to thank all our wonderful staff for your help and input in winning this award." The letter was a kind gesture but nothing could beat the card, handwritten in blue, red, yellow and green marker from Palace Pier's younger residents, Sean, Rachel, Samantha, and Russell that said, "To all staff at Palace Pier – thank you for keeping us safe." 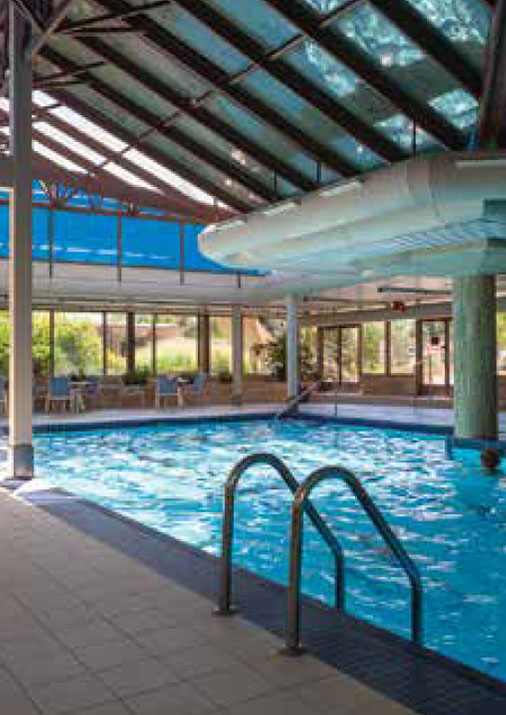 "This building is like family," said Vladimir Volkovecki, a long-serving member of Palace Pier's maintenance staff when I spoke to him back in 2018. My first visit to Palace Pier was an eye-opener for someone who had visited many condominium buildings but never one like Palace Pier. Staff and residents greeted each other by name, people spoke to their neighbors in the elevator and I heard 'please' and 'thank you' so often that I became convinced that Palace Pier was populated by the last true Canadians. During the thick of the pandemic, resident bandmaster Bob DeAngelis live-streamed concerts from his living room to entertain his online neighbours and residents banged pots and pans at their open windows every night at seven in a show of support for healthcare workers and first responders.

"I absolutely fell in love,' is how Board Director Catherine D., described her first visit to Palace Pier in her search for a safe and nurturing community of kindred spirits to raise her son Michael. Lydia Bellerby, one of the first residents to move into the building agrees, "We're Toronto's best kept secret."

Palace Pier is one of only two GTA condominium complexes that operate a private shuttle. The service ferries residents not only to Union Station but to Food Basics, Cloverdale Mall, Loblaws, Sherway Plaza and Walmart thus providing an alternative to the TTC. Ridership however dropped dramatically when the pandemic hit as offices, malls, and many grocery stores closed and residents began self-isolating. At first, the Board debated whether to continue the popular shuttle but quickly decided to keep the service. "Since we had much more control, we could provide a much safer environment (for residents)," said Al. Hand sanitizer stations were installed on the shuttle as well as a Plexiglas shield for the driver. The seating was adjusted to create physical distancing and a comprehensive, twice-daily cleaning regimen was instituted.

The name 'Palace Pier' comes from an amusement complex, once located near the site of the current tower. The City approved construction of the 'Palace of Fun', an illuminated pier originally designed to stretch nearly a third of a mile into Lake Ontario, in 1927. The Pier finally opened in 1941 but was mostly destroyed by fire in the early 1960s. The current Palace Pier, nestled between the Humber River to the east and Humber Bay Park to the west, was completed in 1979 and consists of 433 suites ranging in size from 920 to 3595 square feet. Palace Pier offers residents a wide range of amenities including tennis courts, six BBQs with picnic tables, squash courts, a convenience store, private restaurant, indoor pool, a well –equipped gym, state-of-the-art table tennis room, library, and games, billiards, carpentry, arts, and aerobics rooms. 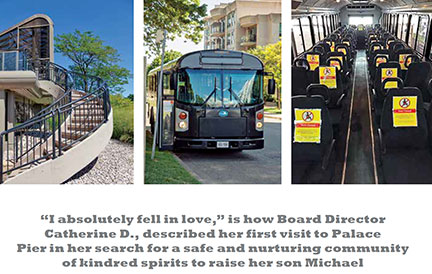 The Palace Pier's Board has paused a broad range of projects that include a renovation of their private restaurant and lobby. Residents were advised at the onset of the pandemic that, "Suite renovations that started before April 4, 2020 will be allowed to proceed, but only after the owner and the contractor have signed the new 'Re-Start Renovation Agreement form which was drafted by our solicitor," says Donald, Palace Pier's Condominium Manager.

"Keep your guard up, "advises Palace Pier's weekly, four page bulletins, initiated in February. But with Palace Pier's exceptional Board, efficient management team and resident's sense of family it's not likely that this pandemic or any other challenge that Mother Nature throws their way will ever dim Palace Pier's reputation as a great place to live.