January, 14 2021 Published by Toronto and Area Chapter - By James Russell

From the Winter 2020 issue of the CCI Toronto Condovoice Magazine. 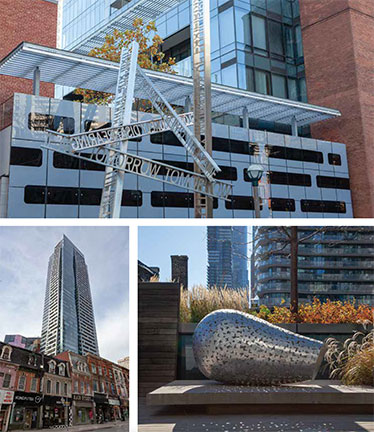 5 Condos, located on the corner of St. Joseph and St. Nicolas, excels as a nurturing home not only because of its gothic heritage and breathtaking artistic elements but also because of Five Condo's vibrant community and board-initiated commitment to exceptional customer service and good governance.

The red brick building that embraces the first four storeys of Five Condos was completed in 1905. That building with its thick walls and Gothic face, and several of the neighbouring buildings, served as the warehouse facilities for one of Toronto's first cartage and storage companies, Rawlinson Cartage. The company's founder, Mr. Marmaduke Rawlinson, was not only a successful businessman but also alderman for Ward 3 in 1911 and 1912. 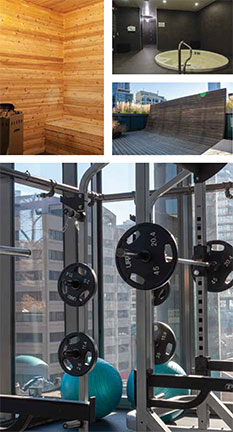 In May 1997, the buildings occupied by Five Condos and the adjacent Eleven Residences, were complimented by the City of Toronto for their "restrained classical detailing," and designated as being, "noteworthy for their flat-headed, segmental and arched opening, decorative brickwork, strong cornices and stone detail." According to the commemorative plaque attached to the face of 11 St. Joseph.

And it's not just Five Condos' lovely façade that garners accolades, in 2010, Five Condos won BILD's "Project of the Year: High-Rise" and "Best High-Rise Building Design award as well as being listed as one of the "15 Most Influential Buildings of the 2010s" by URBAN Toronto.

Within feet of Five Condos' front door is a magnificent, 34 ft high, 20 ft wide, brushed stainless steel structure designed by Eldon Garnet, a Toronto based sculptor, writer and photographer. The work was commissioned by the developer and installed in 2016. The structure, which incorporates five phrases, is titled, Artifacts of Memory and according to the artist, "these texts deal with fundamental conditions of living in the modern world with a focus on the passage of time." 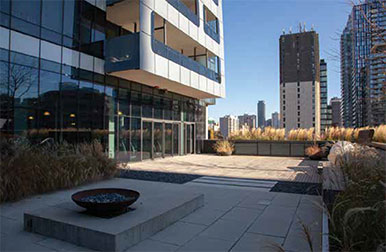 Initial purchasers of the development were impressed by Five Condos' gothic exterior which make it a very distinctive building. Five Condos have more amenities than other luxury buildings in the area and despite its urban constraints, it is generously designed with community in mind as residents have access to ten thousand sq. ft. of indoor amenities that includes a combination billiards area, library, gourmet kitchen bar and media room. Those are in addition to their ground floor pet care room, 2nd floor yoga/therapy room, luxurious guest suite, gas-fed barbeques, and three outdoor patios.

Five Condos' fitness studio is open 24/7 and includes a whirlpool and sauna and opens to a terrace that wraps around the north and east sides of the tower, a perfect location for parties or just cooling off after a workout. Other amenities include a twenty-four hour concierge, a panoramic east and north facing 5th floor terrace and a secluded enclave on the second floor called the Chill Out Lounge, with an adjacent outdoor patio designed and landscaped by Janet Rosenberg + Associates, an award-winning architecture and urban design firm. 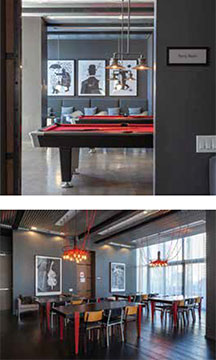 The walls of Five Condos are graced with impressive wallpaper created by Thunder Bay native, Tony Koukou, a world-famous photographer and designer. The wallpaper's bold images were inspired by the graffiti found on the exterior of Rawlinson's warehouse buildings before the area began redevelopment. Five Condos' green amenities include a rainwater collection tank that feeds the boiler, energy efficient onsite washers, ovens and refrigerators and motion activated lighting in the garage.

It is not just Five Condos' gothic heritage and artistic excellence that distinguishes it from the herd. Five Condos has a unique makeup of owners many of who are owners from different parts of the world. In fact, approximately seventy percent of the building's five hundred and thirty-nine units are investor-owned with about half of those units occupied by University of Toronto students. Accordingly, there is a large influx of student residents who return each year to begin the new school year. To help keep all residents informed about their building and neighborhood, a residents-only Facebook page was launched several years ago that now boasts two hundred and seventy-two members. 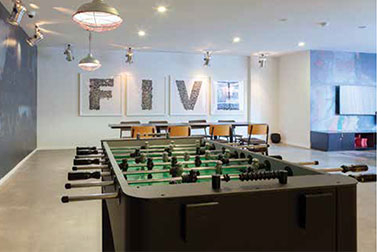 Communication is important at Five Condos. The corporation not only communicates with the residents through Five Condos' monthly, nine-page newsletter, Take Five, but email blasts and a dedicated website portal facilitates service requests and provides access to forms and information.

Five Condos has had a major success recently when it convinced the developer to replace the building's antiquated, single chute sortation system with a trisorter that allows residents to dispose of their organic waste and non-recyclables separately thus diverting unnecessary waste from landfills.

Despite Five Condos' youth of the building the corporation has already begun looking at proposals to upgrade the five-year-old building's LED lighting as the technology has improved in terms of colour temperature, longevity and energy efficiency. 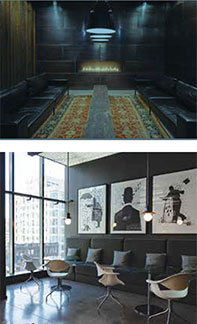 Hospitality industry veteran and Five Condos' Condominium Manager points out that, "This is a very active building," and adds that she and her team's "emphasis is on customer service." Assisting in keeping 5Condos safe and well-managed is an Assistant Condominium manager, four full-time cleaners, a superintendent and three concierges who are kept busy with the onehundred and twenty packages delivered per day and more than two hundred per day around Christmas time. Only registered tenants are allowed to receive parcels, access amenities, or receive assistance from building staff. And, committed to ensure the continued safety and security of the 5Condos' community, the corporation and management inform new residents and remind existing ones that the corporation's declaration does not allow rentals or subleases under six months and that short term accommodation listings, such as those on Airbnb, are strictly prohibited.

Samuel Taylor Coleridge, English poet, philosopher and founder of 17th Romantic Movement once declared that, "The principle of the Gothic architecture is infinity made imaginable." 5Condos have shown that a vibrant modern community built on the solid brick foundation of its Gothic heritage was not only imagined but also realised at 5 St. Joseph Street.